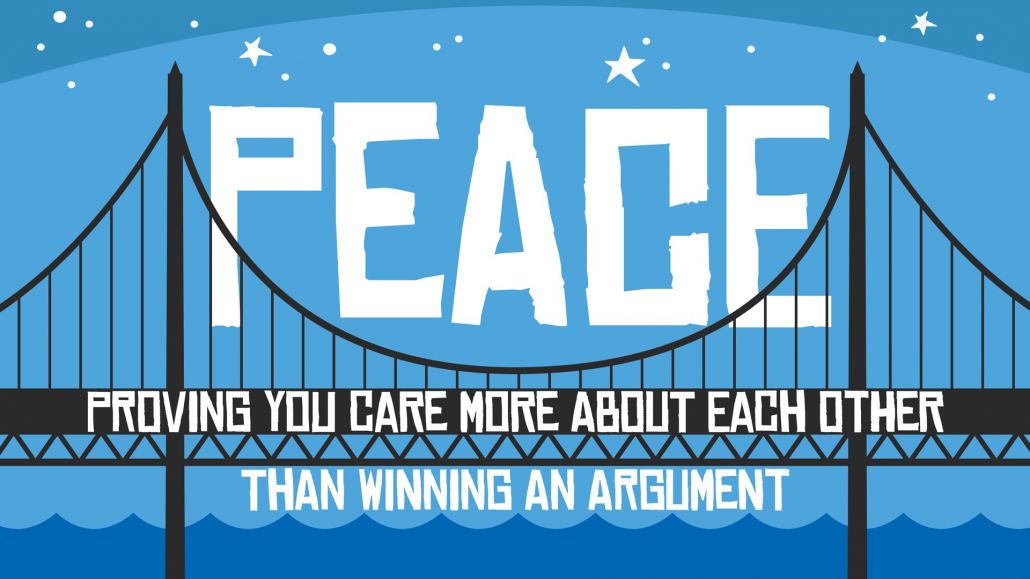 Peace — Proving you care more about each other than winning an argument.

Monthly Memory Verse: So let us do all we can to live in peace. And let us work hard to build up one another. Romans 14:19 (NIrV)

Life Application: Peace—Proving you care more about each other than winning an argument

Suggested Songs: Peace Like a River, King of My Heart, Christ the Lord is Risen Today

What You Might Pray: “Dear God, making peace isn’t easy. Please help me to find ways to help be a peacemaker in my home or at school with my friends. In Jesus’ name I pray, amen.”

What You Do:  Watch the complementary video together as a family and discuss today’s question.

What You Discuss: “Abigail was able to make peace. David was so angry he could kill, but God used Abigail. After talking to her David walked away from a fight. Making peace isn’t always easy, being a peacemaker is incredibly hard but important. What are ways you can be a peacemaker?

What You Need: Bible

What You Do: Hand out Bibles and ask kids / family members to open to 1 Samuel 25:1-35 and read together.

Pray and Bless Your Family

What You Need: No supplies needed

What You Do: Ask for prayer requests.

What You Might Pray: “Dear God, thank You for reminding us to do all we can to live in peace. We need Your help to work on (pause and ask kids to silently insert the trait they feel they need to develop). Help us do everything we can this week to show we care about others by being part of the solution, even if that means that we have to give up something. We want to be peacemakers. Pray for prayer requests. We love You, and we ask these things in Jesus’ name. Amen.”

What You Need: “Abigail Intervenes” Activity Pages (DOWNLOAD TEMPLATE), and a Bible

What You Do: Open the Bible to 1 Samuel 25 and read the passage together.

What You Need: “Coloring by the Numbers” Activity Page (DOWNLOAD TEMPLATE), markers

What You Do: Encourage the kids to recite the memory verse a few times together.

What You Say: “Wow! You did a beautiful job coloring! The bridge and this verse are great reminders that we should do everything we can to build each other up instead of tearing each other down. When you build each other up, [Bottom Line] you can show you care about others by being part of the solution. Like Abigail, God has designed all of us to be creative problem-solvers. We can be part of the solution in our homes, in our classrooms, on our sports teams, and in our neighborhoods. I’d like for you to take this verse home and put it somewhere in your room or on the bathroom mirror to remind you that God wants you to be a peacemaker everywhere you go.”

Read to me books (the same all month)